Cycling in Marburg (3/4): For the city council

I already expressed my excitement about bikes in the previous article in this series, where I dealt with the Nextbike system from the perspective of a Nextbike user. In this article, however, I will evaluate the data from the perspective of a city council. The results cover two of the most important aspects in public life: Social and environmental aspects. We will see quantitative results that indicate social and environmental benefits of shareable bikes in a city. Also, we will find the most popular routes as well as the most active stations.

Hopefully, this article motivates action from the city council. For example, larger bike capacities for popular bike routes or programs to foster the adaption of bikes as daily means of transportation to increase the health of the residents in Marburg.

Let me summarise my findings here for the busy reader:

Let’s first get our head around some numbers that express how actively the Nextbikes are used in Marburg. There are 36 stations and 196 bikes in the Nextbike ecosystem in Marburg.

Are these numbers large or not? Let’s compare the Marburg numbers to those of New York City (NYC)! In NYC, they have 605 stations and 10,000 bikes (source: Sobolevsky, Stanislav, et al. “Impact Of Bike Sharing In New York City.” arXiv preprint arXiv:1808.06606 (2018); see here). To make the numbers comparable to the 36 stations and 196 bikes in Marburg, I divide these numbers by the respective population sizes. 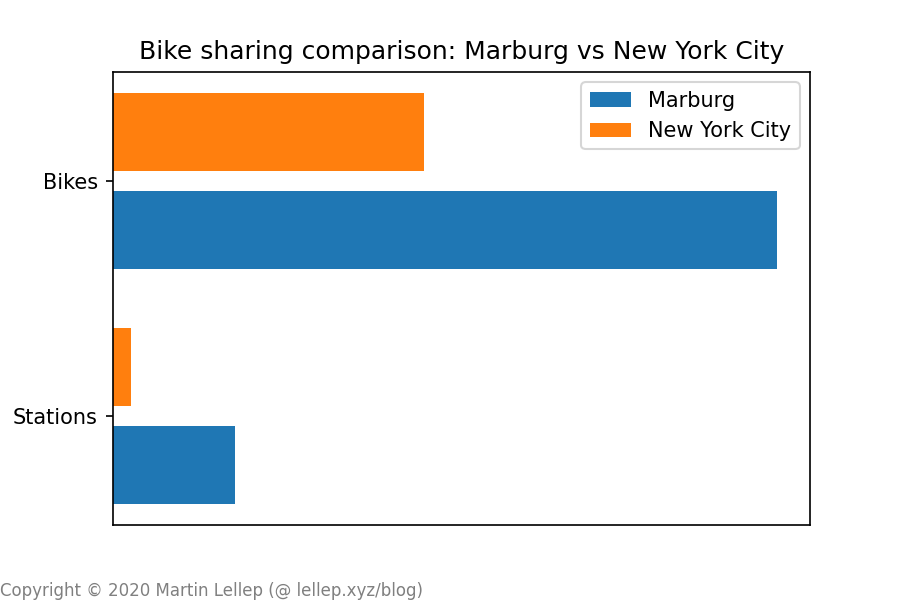 Relative to the population size, Marburg has more bikes and bike stations than the glorious (& beloved!) New York City!

In order to make progress towards the results regarding the social and environmental benefits of having a bike sharing system in the city, we need to know a few details about how the bikes are set up in Marburg and how they are used. 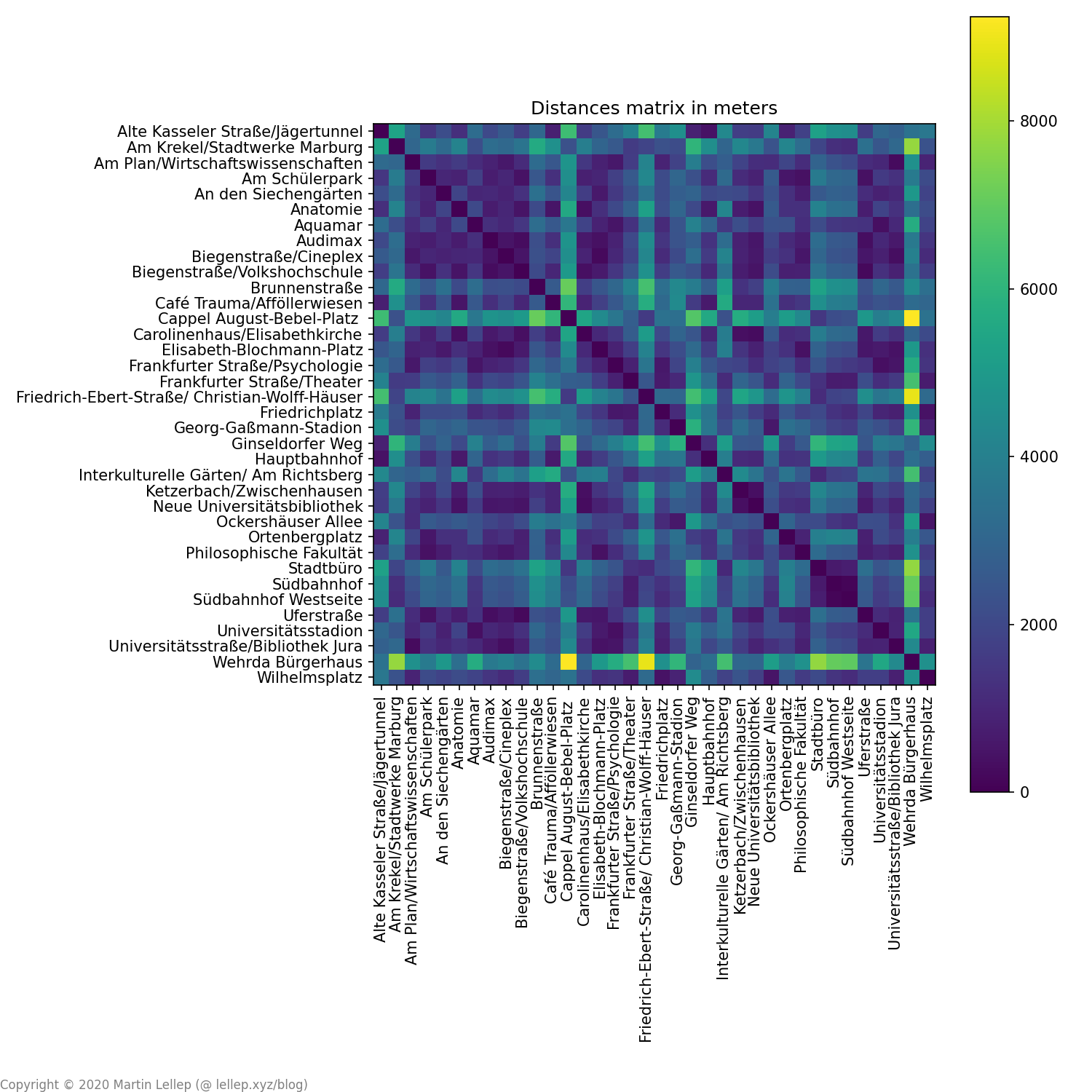 Second, we need the number of bike trips between the stations. Luckily, the data that I colleced, as described in a previous article, allows to track individual bikes at stations. Hence, I can detect when bikes transition from one to another station. From this, I can compute a 36x36 dimensional matrix that stores the transitions between the stations. The following figure shows exactly this matrix. 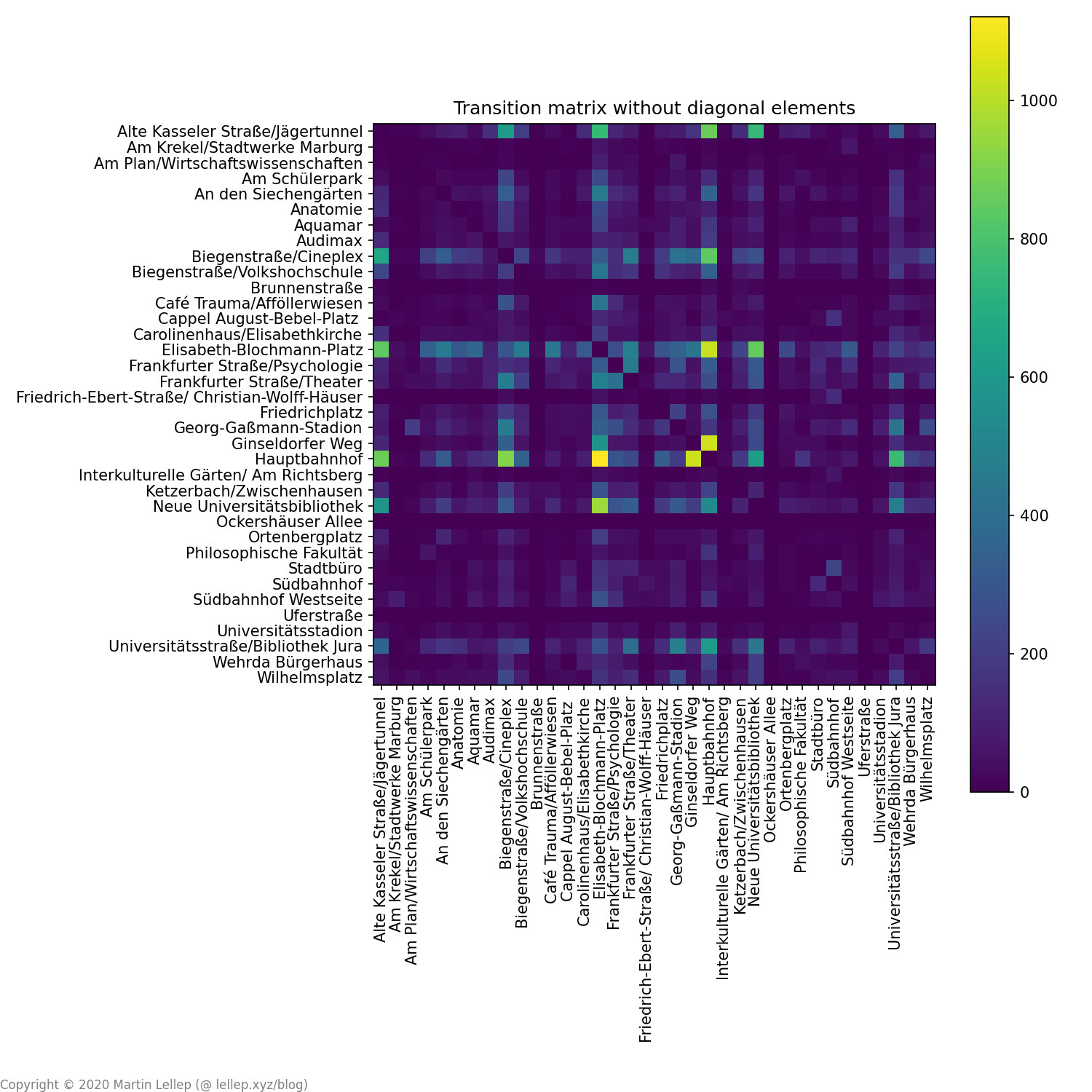 Summing up all entries, we can determine the number of overall bike trips that have been performed with Nextbikes in Marburg. It is a stunning 107,428 bike trips!

When weighted with the distances between the stations, this number translates into the overall number of kilometers covered by Nextbike trips in Marburg: Nextbikes traveled 169424 kilometers in Marburg!

When we assume a relaxed average velocity of 15 km/h, then this distance translates into an overall travel time of 11,295 hours in Marburg with the Nextbike system.

Now we can turn towards the social and environmental benefits of the Nextbike system in Marburg!

I quantify the social benefit of the system by estimating the calories burned through people cycling on Nextbikes. The calorie consumption of cycling is taken from this study (see “Bicycling, Stationary: moderate”). With these values, 4,517,974 kilocalories have been burned in Marburg through cycling on Nextbikes.

This corresponds to around 1,670 jars of Nutella - a unit we are all familiar with.

I assume three numbers based on public information:

With these numbers, we arrive at the following environmental benefits:

These social and environmental benefits are significant. They not only increase the public health but also reduce the environmental foot print of Marburg.

We can do even more with the transition matrix. For cities, it is important to know the load of streets as to adapt their capacities appropriately. I will answer the question here:

What are the routes that are used the most by bikes (as measured by Nextbikes)?

We find the most used routes by determining the entries in the transition matrix that are the largest. The following figure shows the most popular bike routes in Marburg.

We can see that the Hauptbahnhof is involved in most of the popular routes. Hence, it should be ensured that the Hauptbahnhof offers suitable bike lane capacities. Also, the Neue Universitaetsbibliothek and Elisabeth-Blochmann-Platz are stations that belong to popular routes. Therefore, it is also worth setting up more and better bike lanes there. 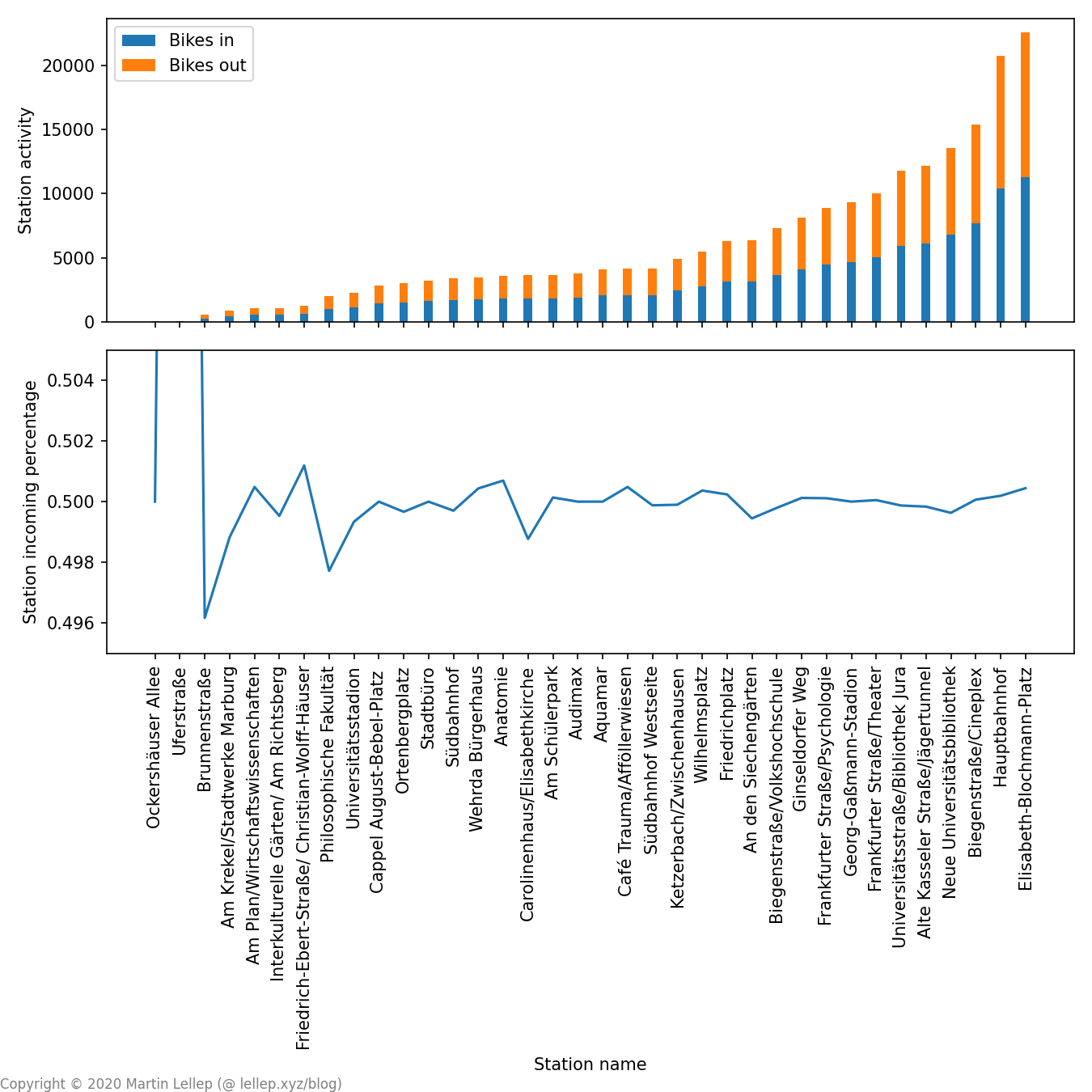 We can see that the Hauptbahnhof and Elisabeth-Blochmann-Platz are the most active bike stations by a large margin. This is in agreement with my previous finding that these two are also the largest stations. The second plot shows how much of the station’s activity comes through incoming bikes. This number is relevant because when it differs significantly from 50%, this indicates that a station could either fill up or run emtpy. The fact that they do not overflow or run out of bikes (see the previous blog post to find out which do!), respectively, might indicate that Nextbike transports bikes manually to and from these stations. Note the Uferstrasse as outlier - this is because that station has been introduced only recently.

Summary for the city council

I evaluated Nextbike usage data from the perspective of a city council and found that cycling has huge social and environmental benefits for a city - the calorie equivalent of more than 1600 Nutella jars is burned and the CO2 foot print that is avoided when compared to cars is worth around two years of German lifestyle. These benefits motivate the promotion of bikes as means of transport in Marburg. Lastly, I found that the Hauptbahnhof, Neue Universitaetsbibliothek and Elisabeth-Blochmann-Platz belong to the most popular Nextbike routes. This motivates action to improve the bike conditions for these routes.

This article belongs to a series of articles. This is the list of all articles: